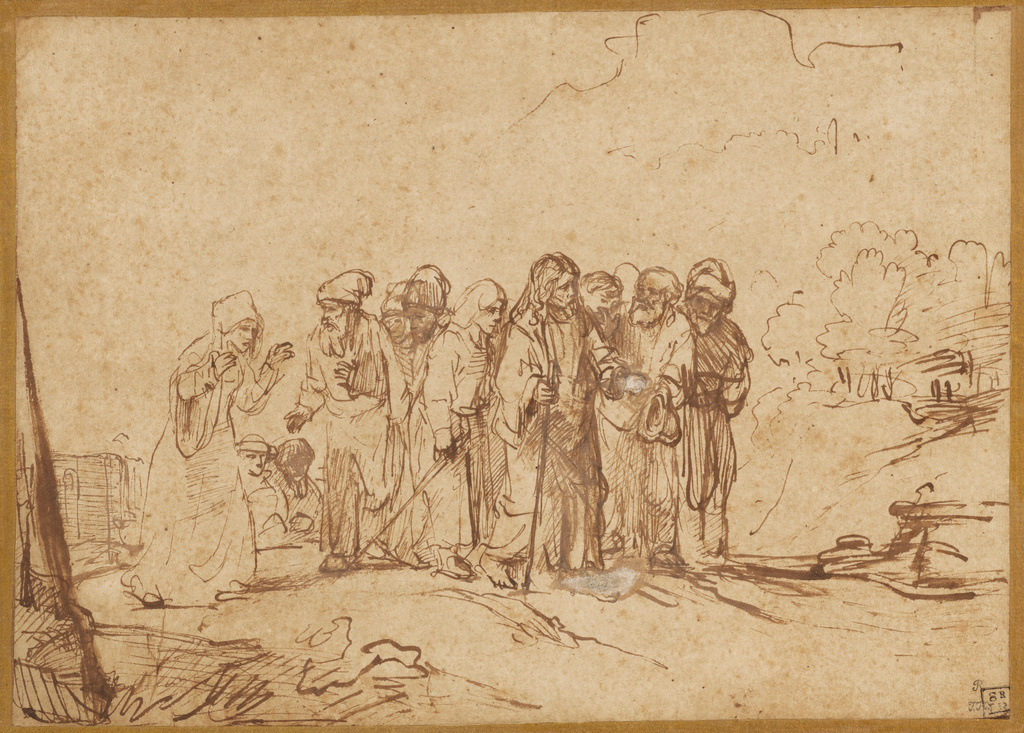 When I looked at the Scripture readings for this week, my first thought was, “Oh, no.  Not Jesus and the Canaanite woman… That’s a tough one.  I don’t want to preach on that!  I’m not sure I’m equipped to preach on that!”

And so, I looked at the other readings, hoping I’d feel a nudge to preach on one of them instead.  But no joy.  The story of Joseph’s reunion with his brothers is a good one (Genesis 45:1-15).  We could all take a lesson from Joseph who, after enormous suffering, came to understand that his travails were part of God’s larger plan to save his family, and provide for the future of Israel.  And he was good with that. It’s a great story to dig into, but not today.

OR… Psalm 133.  This particular psalm is very special to me: Ecce, quam bonum!  “Oh, how good and pleasant it is, when brethren live together in unity!”  Not only is it a timely message for our society today, but it’s also the motto of my alma mater, Sewanee: The University of the South.  EQB! short for Ecce quam bonum! is often exchanged as a greeting or as a parting benediction between Sewanee students and alums.  But that’s not for today, either.

But you know what was funny?  The more I searched for alternatives to preaching on our Gospel passage today, the more insistent the still, small voice inside of me became… telling me to suck it up and preach what I was given… what was in my heart.  So, I’ll try.  And if you hear sirens outside, don’t worry.  It’s probably just the “heresy police” coming to take me away.

You know, there are plenty of places in the Gospel where Jesus says things I don’t immediately understand.  He said, “If your hand or foot causes you to sin, cut it off and throw it away!  Or your eye? Pluck it out!  (Matt 5:29-30).  He said, “I have not come to bring peace, but a sword… to set man against father and a daughter against her mother… kith against kin” (Matt 10:24-36).  He once asked, “Who is my mother, and who are my brothers?” in seeming rejection of Mary and his siblings who had been standing at the edge of the crowd one day, just waiting to speak to him (Matt 12:46-9).  Sounds pretty harsh, doesn’t it?  And here, today, Jesus seems to chastise a woman whose only sin is being of a different faith and tribe.  That doesn’t sound like the Jesus we all know and love, does it?  At least not most of the time.  So, what in the world are we think of this passage?  How can we reconcile it to what we do know of our Lord and Savior? I’ve preached on a few of the afore-mentioned “difficult passages” and, when I do, I always try to interpret the text in light of the overarching trajectory of the Gospel, which is a story of unconditional love and forgiveness.  Unconditional with regard to who you are… and where you’ve been… and no matter how many times you’ve tripped up.  Unconditional means without conditions… of any sort.  And I’m pretty sure that includes the Canaanite woman in today’s story.

You know the Hebrews and the Canaanites had been uneasy neighbors since Abraham and Sarah came to the region a couple of millennia before.  At that point, there was no Hebrew nation, per se.  The Patriarchs (Abraham, Isaac and Jacob) and their families resided in tents, living a somewhat nomadic existence, always in search of fresh pasture for their herds.  They kept themselves apart from the other tribes who lived in the land of Canaan, many of whom were city-dwellers who worshipped strange gods.  But there were fewer people living in the land back then, and so actual conflict was minimal.  Even so, you’ll remember from our recent readings from Genesis that neither Isaac nor Jacob was allowed to take a Canaanite wife.  Both Isaac’s Rebekah and Jacob’s Rachel, were brought from Haran (in modern-day Turkey), where Abram lived for about 75 years, as he and Sarai made their way from Ur of the Chaldees (in modern-day Iraq) to the Promised Land.

So, when drought and famine befell Canaan, it was relatively easy for Jacob to pack up his tents and his family and move to Egypt where things were more stable.  But, by the time Moses led the Israelites out of Egypt back to Canaan a few hundred years later, things had changed.  Cities in Canaan had gotten bigger, the tribes more possessive of the land; and so, the Hebrews, who had been forged into a nation by forty years of wilderness travail, had to fight to reclaim their Promised Land.  And it was ugly.  I’m not going to rehash all of the years of warfare that culminated with the Hebrews consolidating their hold over the land that would become known as the nation of Israel.  Let’s just say that there was a lot of bloodshed… and a lot of pain.  And later, during the years of warfare and decline following the split between the Northern and Southern kingdoms of Israel and Judah, intermarriage between Jews and the indigenous peoples of the land, and the idolatry and worship of false gods resulting from such unions led, in the minds of many, to a time of invasion and captivity and exile.  There was a lot of animosity between the peoples.  A lingering animosity born of a thousand years of tit for tat.  The Canaanites had no love for the Jews… and vice versa.  There was just too much history.

And now we’ll circle back around to today’s Gospel story.  Was Jesus also infected with the tribal animosity that continued to vex the relationships of the Jews with pretty much everyone else in the region: the Samaritans… the Canaanites… the Hellenists (Greeks) and the Romans?  What do you think?  I can’t believe it, and yet, it sure sounds that way.  “I was sent only to the lost sheep of the house of Israel… It is not fair to take the children’s food and throw it to the dogs.”  Why would he say that… when all the Canaanite woman was trying to do was find healing her daughter?  And here’s where I’m going to push the theological, or perhaps the Christological, envelope a little bit.  WHAT IF Jesus is teaching again?  WHAT IF Jesus is giving his disciples the opportunity to put things they’ve learned over the last months and years of their ministry with him into practice, setting aside their separatism and tribal animosities in favor of the unconditional love and forgiveness of the Gospel narrative?  And if you have trouble getting your brain wrapped around that, remember that Matthew’s gospel was written at least a generation after Christ died and rose again.  By this time, Christian churches were beginning to spring up all around the region and Jews who believed in Jesus Messiah… and Gentiles… were gathering together for worship.  WHAT IF Matthew was giving his readers the opportunity to put things they’d learned as Christ followers into practice: embodying the words of the Apostle Paul when he said, “There is no longer Jew or Greek, there is no longer slave or free, there is no longer male and female; for all… are one in Christ Jesus” (Gal 3:38).  In short, what if Matthew’s Jesus is looking for “push back?”  A little questioning and rebellion among his nearest and dearest, based upon what he had taught them… and the example that he, himself had set for them to emulate?  What if…?

But sadly, there was no such push back from the disciples in today’s Gospel story.  As far as we know, they stood looking mutely on, watching Jesus engage the Canaanite woman on his own.  I can almost see Jesus facing the woman, his face hidden from his disciples, eyes narrowed, willing someone, anyone, to take the part of one of “the least of these.”  But no one stepped up.  So, Jesus did it himself… and the disciples missed out on an opportunity.

How often do we, ourselves, miss out on such opportunities?  How often do we get so wrapped up in our own parochial self-righteousness that we miss cues… sent as gifts from heaven… to help us advance God’s Kingdom in the here and now, and move us one step closer to our own salvation?  We are saved by grace: apprehended—laid hold of—by faith.  In last week’s gospel story about Peter’s feeble attempt to walk on water, we hear Jesus admonishing him… gently, I think: “You of little faith.”  Today, however, Jesus commended the Canaanite woman: “Great is your faith!”  You have taken on the hard work of overcoming your own demons, and “turning your other cheek” to the scorn and ridicule of others for a greater purpose, that of your daughter’s wellbeing, which is God’s purpose.  “Let it be done for you as you wish.”

And the disciples will get another chance… on another day, as we all will.  But in the meantime, we should search within ourselves to uncover the parochial, tribal animosities that we harbor towards brothers and sisters of different races and ethnicities, from different socio-economic classes and from different faith traditions, the “Canaanites” in our lives, whoever they might be, and ask ourselves, “How different am I from this Child of God?  How much more or less blessed?  And how much more deserving of God’s favor and mercy?”  And if we listen, and I mean really listen for the answer, we may hear the Psalmist speaking words of comfort and praise: “How very good and pleasant it is when kindred live together in unity!”  For this is how the Lord our God has ordained us to live, in love and compassion with our neighbors, from this day forward, until the end of ages.  Let those with ears, hear!