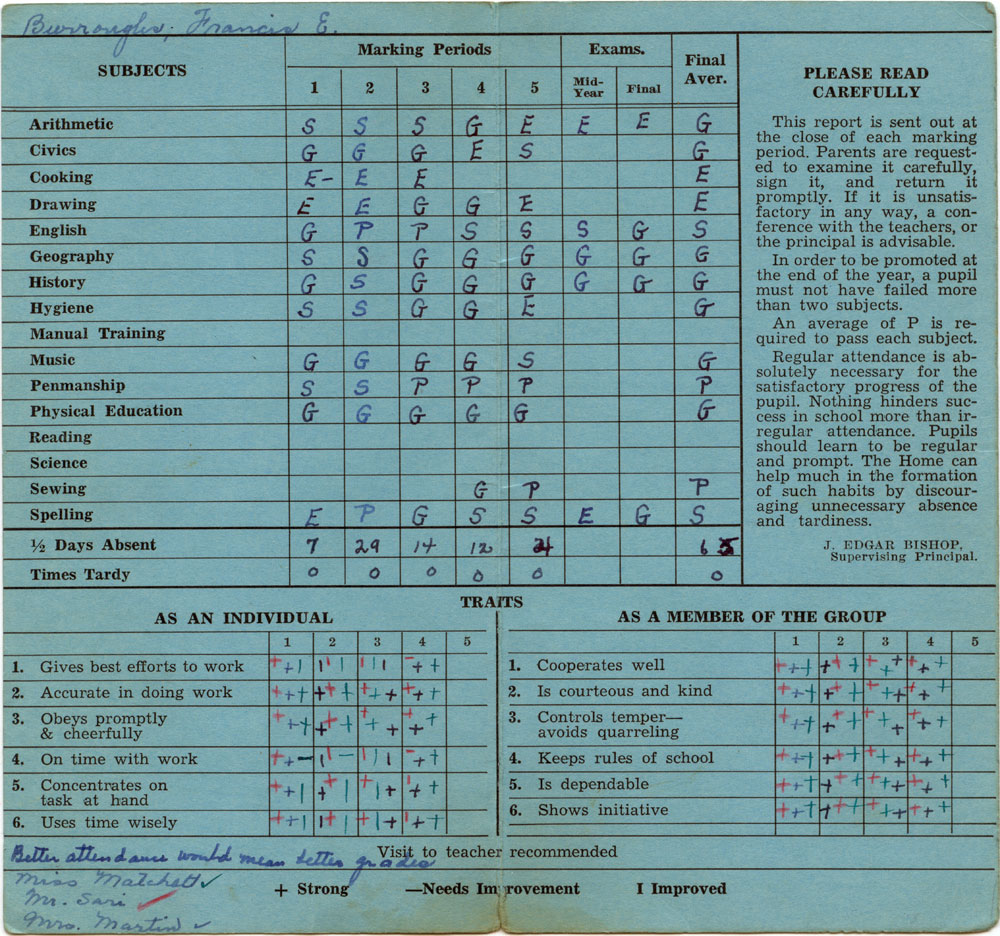 I came across my second-grade report card the other day as I was sorting through a box of (my dear-departed mother’s) memorabilia.  Given the complexity of some of my more recent “grade reports” in grad-school and in seminary, this one struck me as charmingly simple. Certainly, I was graded on reading, writing and arithmetic but, perhaps more importantly, the teacher evaluated what sort of person I was becoming.  There were little blocks where she could mark how good I was at following directions, how well I listened, and whether I stayed on task when I was working by myself.  Did I play well with others?  Did I share? And look after my books and school supplies?  And then there was the block about “Uses Time Wisely,” but we won’t talk about that.  The metrics were similarly simple: “S” for satisfactory, “N” for needs improvement and we all know what the dreaded “U” meant… unsatisfactory.  You didn’t want to bring home many of those.  So… either you were doing OK… or you weren’t.

As we got older, things got more complicated.  We began learning about “language arts,” different kinds of arithmetic, and science and social studies.  Recess became “physical education.”  And the grading scale changed, too.  You might have done excellent work, or maybe just good. Average work was OK for some, but not so much for others.  Most would have preferred to do better than “barely passing,” but that was better than what my high school German teacher, Frau Bolen (we simply called her “the Frau”) liked to call the “Große buchstabe F,” or big letter F.  You didn’t want to bring home many of those.

Suddenly, instead of doing either OK—or not—in school, we were rated on a scale… against our peers… which meant they really weren’t peers anymore.  A pecking order had been created.  When we “chose up teams” for sports: some were among the first to be chosen… and others among the last.  There was an “A” team, and there was a “B” team.  Competition ensued. And then standardized testing came along, and we found ourselves segregated into percentiles.  Some parents crowed…while others wept.  Later, we’d define success by where we went to college, what we did for a living, how many times we were promoted, who we married, how much money we made, how much “stuff” we accumulated and, of course, how our own kids did in the classroom and on the ball field.  I’m not saying that metrics, or appropriate recognition for people who excel in particular areas are bad.  These are things that encourage people to work towards becoming the best that they can be,which is a good thing.  And there is nothing wrong with a little healthy competition.  The problem arises when we start constructing “mythologies” around our own worthiness and begin to believe that our accomplishments and awards make us somehow superior to other people, or groups of people.

You’ve got to wonder about the content of the disciples’ discussion on the road to Capernaum.  What “mythologies” had they constructed around their own lives that would propel them to “the top of the heap” among Jesus’ followers?  Peter, Andrew, James and John were fisherman… a hot, smelly, dirty profession unlikely to earn them a lot of money, but they and their families probably had enough to eat… most days. Matthew was a tax collector and he probably did make a lot of money… but I doubt he spent too much time talking about it.  Most Jews considered tax collectors to be turncoats—collaborators with their Roman occupiers—pretty much the scum of the earth, and if you lorded it over folks too much, you might end up maimed… or worse.  At least Matthew could read and write.  Philip and Bartholomew, Thomas, James (the lesser) and Thaddeus, Simon the Zealot and Judas Iscariot… we have no idea what they did for a living.  They may have been day laborers, hardscrabble farmers or perhaps even tradesmen like Jesus… we don’t know.  The Bible doesn’t tell us.  It’s likely, however, that they were a pretty “salt-of-the-earth” bunch… and illiterate.  Not the sharpest tools in the box, especially in Mark’s Gospel.  And yet, Jesus had chosen them. But like most of us adults, the disciples had found ways to differentiate themselves, one from another.  They seem to have created a “pecking order.”  Perhaps they argued about who was strongest, or fastest, or who had biggest house, the prettiest wife, or the most children.  Perhaps some boasted about having been disciples of John the Baptist before deciding to follow Jesus.  Maybe others about who had performed the coolest miracles when Jesus had sent them out two-by-two a few weeks back.  And they knew Jesus wouldn’t approve of their posturing, but they did it anyway.  It was just their nature.  Sound familiar?

And Jesus lost no time in setting them straight, as he usually did, probably with a sigh.  “The first shall be last… and the last shall be first,” he said (cf. Matt 19:30).  They were to serve one another.  And then Jesus told his disciples how to prepare themselves for this most important work: by welcoming a child.  In Matthew’s version of this Gospel passage, Jesus adds, “Truly, I say to you, unless you turn and become like children, you will never enter the kingdom of heaven.  Whoever humbles himself like this child, he is the greatest in the kingdom of Heaven” (Matt 18:3-4).  My brothers and sisters: we, as Christ followers, are called to help bring about a world and culture turned upside down!  This is the Kingdom, the New Jerusalem (Rev 3:12; 21:2), for which we’re striving… a kingdom built on God’s righteousness, not our own.  Where malice and deceit and hypocrisy and envy and slander are no more.  A Kingdom where there are neither rich nor poor, because we all look after and serve one another.  Where superficial differences in gender and skin color and language and “religion,” and all the things that separate us from each other, become meaningless, because we understand that we were all formed from the dust of the Cosmos by the same Creator.  A kingdom in which we learn to love each other as Christ loves us, full of peace and joy in the Holy Spirit.

“How do we get there?” you might ask.  It’s simple.  We can attain the kingdom by following directions: reading the Bible and paying attention to the lessons contained in Scripture.  By listening, carefully, to what the Holy Spirit is asking us to do.  By asking ourselves, “What would Jesus do?” and always trying to do the same, even when it means having to work by ourselves.  And by taking care of God’s creation, with which we have been entrusted.  The hour is late. This would be a good time for all of us to practice using our time wisely.  And here’s some Good News: you won’t need any of the money… or the titles… or the trappings of success you’ve accumulated during your earthly sojourn.  Jesus not only wants us to welcome children in his name, but to step down off of the pedestals we have created for ourselves and stand before him, just the way God made us.  Jesus wants us to come to him as children, and to do our best to play well with others, loving God and our neighbor above all else, and sharing (paying forward) all of the gifts with which we’ve been blessed.  That’s it.  It sounds charmingly simple, doesn’t it?  Perhaps even absurdly simple.  But don’t worry… you’ll be fine.  It will be enough.  You’ll get… an “S.”