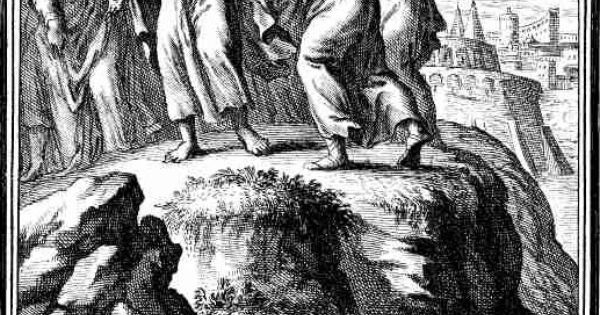 Just imagine: there’s Jesus sitting in the synagogue in his own hometown of Nazareth, amongst all sorts of folks who had watched him grow up over the years.  Some may have known him pretty well; others might not have met him, but had probably heard of him… you know, like that third or fourth cousin, twice removed, that people here in the South talk about at family reunions.  So, Jesus was among family, or at least extended family, there in the synagogue and it was likely a comfortable time of shared devotion.  Until he dropped the bombshell: “Today, Isaiah’s prophecy about the coming of God’s kingdom has been fulfilled.  In me.”

I can imagine a moment of shocked silence, perhaps followed by a gasp and a little “yes!” from somewhere near the back of the room (his mother, perhaps)… people looking from side-to-side at their neighbors on the benches… some alarmed, many skeptical at this unexpected intrusion into their ritual. Then, a low buzz of conversation: “You know, Judith, I always knew there was something about him. He has such a wonderful presence!”  “Oh I know, Esther!  His parents must be so proud. Do you remember the story about that time, must be fifteen or so years ago, when he disappeared for two whole days in Jerusalem?  And when they found him, he was sitting in the Temple with the teachers holding forth just like he was one of them!  His mama must have given him what for!” “Wait a minute,” rumbled a man’s voice from across the room “Isn’t that… Joseph’s boy?  Where’s he been lately?  Looks like he’s all grown up.”  And a response, “He does, Levi. Where’s this guy been hiding?  We sure could use some of that “good news” here in Galilee.  Yesiree, we got plenty of trouble and oppression right here in Nazareth.”  And they did.

The Romans, weary of the incessant squabbling between the Jews and their Herodian overlords, were taking a more active (and brutal) role in policing the Galilean provincials.  Taxes were high, and the arrest and torture of political prisoners was commonplace.  Groups of armed Jewish “zealots” roamed the hills preying upon Roman commerce… and suspected Jewish collaborators.  Some had even been bold enough to ambush small military units, killing the soldiers and seizing their weapons and provisions.  The results of such lawlessness had been predictable… and disastrous.  Roman authorities thought nothing of executing ten locals for every soldier murdered in order to discourage such rebellious behavior, and they offered generous bribes—aimed at turning brother against brother—for information leading to the capture of Jewish partisans.  Many succumbed to such tactics, and so not only poverty but also internecine violence and suspicion had become endemic throughout the region.  Yes, Galilee was a mess.

And here came Jesus preaching good news to the poor, release to the captives, recovery of sight to the blind, and freedom for the oppressed… truly, the year of God’s favor was at hand.  Finally! For a people at the utter limit of their endurance, Jesus’ words were a powerful message of hope. And so, perhaps they can be forgiven for expecting this new prophet to swoop in and make all things right.  But then Jesus burst their bubble, informing them in no uncertain terms that he would not be sticking around to work miracles in Nazareth.  At first, there was stunned disbelief.  Why would Jesus say that? Did he not understand the urgency of their need?  Bitter disappointment flared into anger… and then into rage. The crowd that, only a moment before, had been so pleased and supportive of their new favorite son now assaulted him, manhandled him, pushed him to the edge of a cliff and then… Jesus disappeared.

There’s a lot to ponder here.  How could Jesus seemingly ignore the plight of his “extended family” in Nazareth?  How could the crowd turn so ugly, so quickly?  If Jesus’ didn’t intend to help the people of Nazareth, why did raise their hopes in the first place?  And, if Jesus wasn’t going to help them, then who would?  Who could?  Hope is a powerful thing.  I wonder if Jesus, in proclaiming the advent of “the year of God’s favor” to the people of Nazareth, was inviting them… to stop all of their infighting, to set aside all of their sinful and selfish habits and to start behaving like people of God!  I wonder if… implicit in Jesus’ refusal to stay with the people of Nazareth to be their own private miracle worker… was a challenge to them to become miracle workers themselves: to bring good news to the poor, proclaim release to captives and recovery of sight to the blind, to free the oppressed, to take upon themselves the role God had intended for them since the time of Abraham… that of being bringers of God’s Kingdom on Earth. But I guess the good people of Nazareth didn’t take it all that well, did they?  I wonder if you and I have taken it any better.

When was the last time you were tempted to throw Jesus off the cliff?  I believe we get nudges from the Holy Spirit all the time… telling us how we can be Kingdom bringers.  How many opportunities were you given to spread the Good News and proclaim the year of the LORD’s favor… yesterday?  Last week?  Last month?  And how did you respond?  How many times did you give into the Holy Spirit’s prompting… and how many times did you just take the path of least resistance, and kind of nudge Jesus over the edge of the cliff, where he would be out of sight and out of mind?  I think we’re all tempted to throw Jesus off the cliff when he tells us something we don’t want to hear… or when we know that following Jesus—and doing what Jesus would do—might be difficult or unpleasant… or unprofitable.  I think we’re tempted to throw Jesus off the cliff when we talk about immigration… healthcare and reproductive rights… race relations… gender and marriage equality… homelessness… social welfare, what constitutes fair taxation… and a bunch of other issues that create divisions within our communities… even within our churches.

Jesus tells us that the poor and persecuted, the dispossessed and the disenfranchised, will always be with us (cf. Matt 26:11, Mark 14:7 and John 12:8).  We will never be able to “fix” all of the social problems with which this world is confronted.  But that shouldn’t stop us—mustn’t stop us—from striving to do the work God has set before us… which is being the hands and feet… the Body of Christ, in our own hometowns.  The people of Nazareth seemed ready to believe that Jesus was sent from God to prophesy the year of God’s favor; and they seemed pretty avid to see Jesus perform some local miracles, just as he had in Capernaum.  But what had they, themselves, been doing to “prepare the way of the Lord,” as Jesus’ cousin John (the Baptizer) would have put it?  Not so much, I’m thinking.  In refraining from performing any miracles in Nazareth, Jesus forced the townspeople to confront their own assumed helplessness and inaction… their own failure to do the hard work of helping to heal the divisions within their society and live into their ancestral vocation of being the people of God in Nazareth in Galilee.

And when we’re feeling sorry for ourselves and find ourselves asking why God doesn’t do something about the multitude of ills that confront our generation, we should remember that God has done something… is doing something.  God has created us. Perhaps you’ve heard the phrase: “If not me, then who? If not now, then when?”  And maybe you’ve heard the song “Do Something,” by Christian singer/songwriter Matthew West, that explores this question in light of our vocation as bringers of God’s Kingdom… “We are the salt of the earth, we are a city on a hill,” West sings, “But we’re never gonna change the world by standing still.”  I think we’d all do well to reflect on the challenge implicit in the lyrics of this song the next time we’re tempted to throw Jesus from the cliff.

Matthew West: “Do something!” Watch the video!