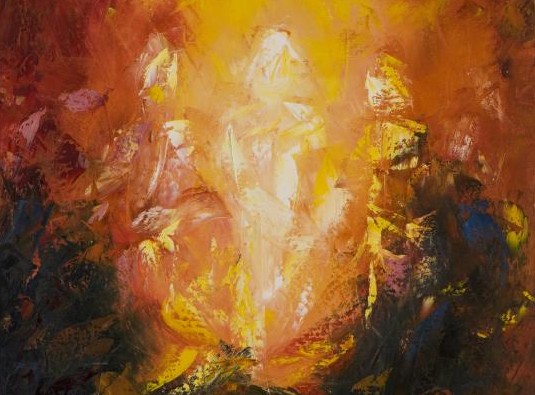 So… a priest and a rabbi walked into a bar… oops, I mean they were sitting in a coffee shop one day having a theological conversation.  We’ll call them Bob and Moishe.  They were discussing the nature of God and salvation, and things were beginning to get a bit lively when Moishe leaned across the table and asked Bob: “How big is your God?”  Somewhat taken aback, Bob paused a moment before saying, “Oh around ‘yea… by yea…,’ using his hands to sketch out a box in the air about eighteen inches square. Moishe, responded quizzically, “So… your God is about the size of a bread box?”  “Oh… you were asking about God!” exclaimed Bob.  “Now I understand!  I thought you were asking about my dog!” Perhaps you’ve heard this story.

Pretty funny, huh?  But as I reread Luke’s story of the Transfiguration in today’s Gospel lesson, it occurred to me that, sometimes, we want our God to be about the size of a bread box… something we can contain and control when his power and glory and majesty seem overwhelming… when it rocks our world… and requires us to change the way we live.  I wonder if Peter, John and James felt that way.  Jesus had picked them to be his particular friends and followers.  You know that the Greek root for the word Apostle is Apostolos (ἀπόστολος) which means one who is to be sent forth, in this case to preach the Gospel of Christ.  And I’m sure that they had answered the call in good faith.  I mean, who wouldn’t want to be in on the “ground floor” with Jesus of Nazareth?  By this point in Luke’s Gospel, his ministry was really beginning to take off: the crowds who gathered to hear Jesus preach and teach were getting bigger and bigger… sometimes scary big.  Jesus performed all manner of signs and miracles as he travelled around the Galilean countryside… curing the sick and the lame, casting out demons, and even bringing people back from the dead!  Shazam!  Peter, John, James and the rest of the twelve Apostles had, themselves, only recently returned from a mission to “proclaim the kingdom of God and to heal,” and had they had come back confident and empowered by the Spirit.  So, things were looking up for these three “homeboy” fishermen, whom Jesus had promised to make “fishers of people” (Matt. 4:19, cf. Luke 5:1-11).  Who could blame them for being excited.  And today, Jesus had taken them with him on a special road trip… up the mountain to pray with him.  Perhaps Peter, John and James were congratulating themselves, silently, behind Jesus’ back for being so chosen.  Look at us… we’re so cool!  And then… something happened.

At one point, their hike up the mountain changed from being a simple gad-about with the Master to something different… and far more profound. Jesus had brought the three with him to show them a glimpse of the present… the real present… and of the future.  There on the mountaintop, Jesus was transfigured.  Luke tells us that “the appearance his face changed, and his clothes became dazzlingly white” (v. 29). I doubt Jesus actually changed… he’s the eternal Word, after all… who was… and is…and is to be.  But appearance can be subjective, can’t it?  Sometimes we see what we expect to see.  And, although Peter, John and James had been living day in, day out with Jesus for months now, their understanding of who Jesus was… and the impact that would have on them… was still evolving.  Sure, they knew that Jesus was a pretty special guy, a miracle man without a doubt, one who could do a lot of good, and ease a lot of suffering in the local community.  And they knew that the Jewish religious establishment was beginning to take notice of what Jesus was doing… and not in a good way.  But I’m not sure they quite had their brains wrapped around the reality of Jesus as God’s Christ… the long-awaited Messiah… the Savior of the World.  Which is why Jesus offered them glimpse of the real present… and a sneak peek into the future.  I wonder if, as they basked in the glory of Jesus’ revelation, they might also have been disturbed by words of his “imminent departure.”  Jesus had been talking a lot lately about suffering and rejection, and even death. Was this more of the same?  It would be great if he would just cut out all of that nonsense.  The Apostles had given up everything to follow Jesus!  What would they do without him?  Sometimes stuff he said was so… unsettling!  Just a few days before, Jesus had declared to the disciples: “If any want to become my followers, let them deny themselves and take up their cross daily and follow me” (Luke 9:23).  Certainly, Peter, John and James knew what crosses were for… nothing good! And I wonder if it sent a shiver up their spines: wanting so much to be faithful followers of Jesus and yet… wondering how they could face his implicit invitation to suffering, rejection and death. Who could blame them for being terrified?  And so, Peter, ever the impetuous one, made Jesus a counter offer: “Glad to be with you.  Hey, how about if we were to build you and Moses and Elijah a place where you can rest… lay your heads?”  Surely the offer was made in good faith on one level… to provide the three transcendent beings a place of honor… and shelter.  But I can’t help but think that, on another level, Peter was hoping that he could build a structure that might somehow contain Jesus a little bit… one that could, in some way, mitigate the impact of following him.

What do you think?  Am I reading too much into Luke’s storytelling?  Maybe.  But we all need to ask ourselves the question: “How often are we tempted to put God in ‘a box about yea… by yea?’”  I know I am, sometimes.  How do I reconcile “Love God… Love your neighbor… and don’t judge,” with my beliefs about capital punishment?  How do Jesus’ teachings about sheep and goats… and looking after the least of these… inform my stance on universal healthcare insurance… and immigration?  And if Jesus came to earth to show us the Way—how we might become more fully-human in accordance with God’s plans for us from the dawn of creation—if he was willing to give up his life on the cross to show us that death was not the end… how can I justify, even in my own mind, the amount of money we spend in this country, daily, on guns and bombs and implements of war…when there are millions of children in the world who need food… and medicine… and a roof over their heads?  It’s obscene.  And I know it. And that makes me even more culpable.  And so, I deceive myself by keeping God in a box, “about yea… by yea,” where I can pull him out when I need an advocate, a cheerleader… or maybe just a hug.  Keeping God in a box keeps the pressure at bay, and allows me to put off thinking about the cross Jesus tells me I must bear… if I want to be his follower.  And I do…I do!  But it’s hard.

But the reason we’re all here today is that Peter, John and James ended up being braver than I think I can be some times.  You’ll notice that Jesus didn’t have to tell Peter not to build a booth.  He may have given him a look—that Jesus look—but he didn’t need to say anything, because God spoke.  “This is my Son… listen to him!”  And Peter, John and James listened.  They overcame their fear of rejection, suffering and death… they resolved themselves to take up their crosses… and follow Jesus.  And they ended up losing their lives (both literally and figuratively) for the cause of Christ, and in doing so, were saved.  Such a glorious paradox.  I don’t know about y’all, but it makes all of my anxieties and uncertainties about how to live my life as a follower of Jesus Messiah seem pretty insignificant.

I’ve heard it said that the wiser one becomes, the fewer choices one has to make.  Or, in theological terms, the more we understand about the animating force behind the universe… which is God… the more we are drawn to give into it.  There is always a right thing to do!  So, if you believe that Jesus Messiah is the Son… the Chosen… the Beloved of God, then I’m pretty sure that in any given situation, the wise thing, the right thing to do, is what Jesus would do.  So, listen to him!  When you’re feeling all alone in the Universe… listen to him!  When you’re grappling with fear of rejection, and suffering, and even death… listen to him!  And when you’re wondering how you can be church to a world in great need of hope… listen to him!  It’ll come to you.  And you… and I and all of the great length and breadth of this world… will be transfigured by the light of Christ.