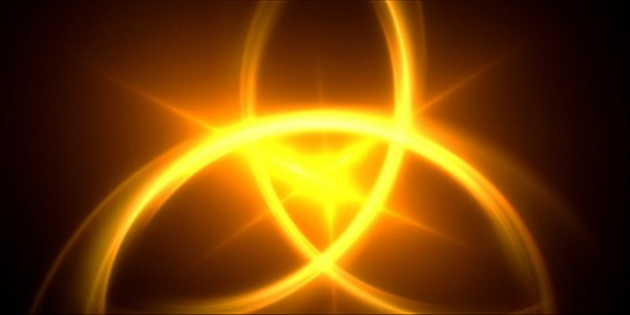 Trinity Sunday always rolls around about this time of year.  It’s the first Sunday after Pentecost… and helps ease us out of the Great Fifty Days between Easter and Pentecost and into “ordinary time,” that long green season encompassing the period between late Spring and early December (and the new Advent) in the liturgical calendar.  It’s a major feast—which is why everything is dressed in white one last time before All Saints’ rolls around again in November.  In larger churches, the senior pastor is usually happy to delegate the preaching on Trinity Sunday to a junior cleric.  But here at St. James’, you’ll have to bear with me… as usual. Actually, I think preaching about the Trinity is cool.  Scary, huh?  But fear not.  We’ll get through this together.

The Trinity… what’s it all about?  What does it mean?  Interestingly, the word “Trinity” does not appear in the Bible.  Jesus never used it.  In fact, although Jesus makes repeated references to God as the “Father,” and to himself as God’s “Son” throughout the Gospels, it’s only towards the end of the Fourth Gospel that Jesus speaks of the coming of an Advocate… a helper… a comforter… who will be present with the Apostles after he is gone (John 14:16, 26). And it is only in Matthew’s Gospel that Jesus ties the “Three Persons of the Blessed Trinity” together in the Great Commission, telling his followers to “go… and make disciples of all nations, baptizing them in the name of the Father and of the Son and of the Holy Spirit…” (Matt. 28:19).

So the “Doctrine of the Trinity” is, in one sense, something that seems to be implicit in Jesus’ teaching, but also a concept that the Church expanded upon and “standardized” during the first few centuries of its existence in an effort to make sense of what Jesus was trying to teach us about the nature of God.  In the Nicene and Apostles’ Creeds, we affirm that we believe in God the Father, in his Son Jesus Christ, and in the Holy Spirit, among other things.  Of course, the language of the Creeds we recite today did not “leap full-blown” from the minds of the Patriarchs into Church doctrine—they were developed and amended over time to meet the needs of believers… and the Church hierarchy.  Interestingly, the First Council of Nicaeathat took place in 325 AD (and from which the Nicene Creed derives its name) addressed primarily the “coequality” of God the Father and God the Son.  The “Holy Ghost” is mentioned only in passing, and it wasn’t until the First Council of Constantinople, 56 years later, that the Church Fathers formally defined the “third person of the Trinity” and inserted corresponding language into the Nicene Creed.  Me?  I’m pretty sure the Holy Spirit was co-equal all along… and we, the Church, were just a little bit slow on the uptake.  Typical.

But, all snarkiness aside… the point is that this is complicated stuff and lots of smart people—who lived a whole lot closer to the time that Jesus lived and taught—had a lot of head scratching and parsing of words to do before they felt like they had it even close to right.  And so, we are left with a complex concept of God in three persons,which is the Blessed Trinity. What might this look like?

You may recognize the triquetra (or three-cornered knot) depicted in the graphic to the left. The triquetra has its roots in Celtic art and symbology and has grown in popularity, from the nineteenth century to present, as a sign of the Christian Trinity. This representation of the triquetra includes the arc of a circle passing through the three interconnected loops of the knot, emphasizing the unity of the three persons within the endless, all-encompassing arc of God’s love.

I’ve found the graphic to the right to be helpful in understanding the relationship between the three persons of the Trinity. It uses the form of the triquetra to illustrate that God is Father. God is Son. God is Holy Spirit. But the Father is neither the Son… nor the Holy Spirit. And the same is true for the other two persons of the Trinity. Each is distinct from… and yet, in perfect union with the others. It’s pretty elegant… and also pretty mind-boggling. No wonder it took the early Church three-and-a-half centuries to finalize the words of the Nicene Creed!

“Trinitarianism” is not a part of the belief systems of other Abrahamic traditions: in fact, many religious scholars within Judaism and Islam have openly questioned whether or not Christianity is truly monotheistic.  And even certain Christian denominations, such as the Church of Latter-Day Saints (Mormonism) and the Jehovah’s Witnesses, disavow belief in a “triune” God.  But here’s the thing: I’m pretty sure God isn’t all that concerned with church doctrine. Doctrine is something we humans develop to help us get our brains wrapped around mysteries we’re having a tough time coming to terms with.  Mysteries like: how can the same God that created the world, and everything in it, from dust… the God who thundered the Law into being from atop Mt. Sinai… the God who has, over-and-over again, shown that he is mighty to save… how can that same God who was “the Word” from before the beginning of time… stoop to become Immanuel, God with us, born of a woman, to laugh and cry and hurt and love with us… to redeem us from sin and error, and show us that death is not the end?  And how can the God who has done all of these things still be with us?  Comforting us, guiding us, helping us discern God’s movement and purpose in our lives each and every day? How, indeed?  Sometimes, when I think about it too hard, I’m afraid my head might explode.  But it’s a mystery.  Like I said, I’m pretty sure that God doesn’t spend too much time worrying about church doctrine.  I think God wants us to know that we are loved… and that he’ll do pretty much anything to be in relationship with us.  He is, at once, our Creator, our Redeemer and our Sanctifier: God above us… God beside us… God inside of us.  God will be our everything, if we’ll only allow it.

Please pray with me Anglican Bishop and Theologian N.T. Wright’s Trinitarian adaptation of the Orthodox “Jesus Prayer,” as found below:

Father almighty, maker of heaven and earth:
Set up your kingdom in our midst.

Lord Jesus Christ, Son of the living God:
Have mercy on me, a sinner.

Holy Spirit, breath of the living God:
Renew me and all the world.