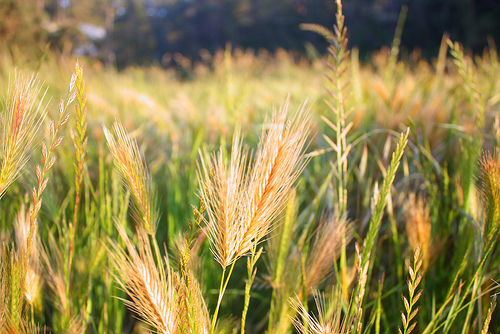 Separating the weeds from the wheat. Yeah, baby! That’s what God’s Messiah is gonna do on the last day. Earlier in Matthew’s gospel, John the Baptizer foreshadowed today’s parable when he said: “I baptize you with water for repentance, but one who is more powerful than I is coming after me; I am not worthy to carry his sandals. He will baptize you with the Holy Spirit and fire. His winnowing fork is in his hand, and he will clear his threshing floor and will gather his wheat into the granary; but the chaff he will burn with unquenchable fire” (Matt. 3:11-12). What a day that will be, right? What a day. And, if you’re like me, you’re hoping that you’re gonna be part of that “wheat” harvest… the part that gets gathered into God’s almighty granary… not the weeds and the chaff that get winnowed out and cast into the fire. We should all hope for that.

You know, I spend a lot of time preaching about the unconditional love of Jesus, and about being saved by grace, and about our God being not a God of punishment but one of forgiveness, a God of a million second chances. And I believe that that is true. BUT… there will be a day of reckoning, when each of us will stand before our maker and have to own up to things done and left undone during our time on earth. What’s that gonna be like? And what will be the outcome? I don’t know, precisely… but here’s some food for thought: It’s way too easy to look at our Gospel passage from Matthew today in binary terms: that is, “Well, you’ve got your wheat people, and you’ve got your weed people. God will take care of those nasty weeds on the last day; but in the meantime, you should keep your distance. Don’t be like the weeds.” Except, here’s the thing: I’m not sure that Jesus, or John for that matter, is talking about separating “wheat people” from “weed people” on the last day. I’m pretty sure what Jesus is actually getting at is the need for us to become reconciled with God through being reconciled with ourselves. It’s kind of like what Pogo the ‘possum (you know, the one from the comic strip) once said, “We have met the enemy and he is us.” Pogo was talking about environmental stewardship, but I believe we can adapt his sentiment to our stewardship of the brief span of years we have been granted in this life. What if the weeds are not other people… or situations… or anything else that is outside of us? What if the weeds are so integrated… so intertwined with our own roots, so much a part of our being, that we have a hard time telling what part of us is weed and what part of us is wheat? What if we’re even afraid, sometimes, that we’re mostly weed. “We have met the enemy and he is us.”

I am reminded of the story of a young man named “Ged” in Ursula K. Le Guin’s Wizard of Earthsea trilogy. Perhaps you’ve heard of it… it’s the story of a boy of humble origin who grows into a great wizard and ends up saving the world. There is a lot of good in young Ged, but he is wildand proud and dissatisfied with his life as a sheepherder. He wants more… and, at one point, he meets a mage named Ogion who helps Ged understand that he has a vocation for wizarding… and a whole new world of possibilities was opened to him. His little corner of Earthsea, like our own sphere of creation, was always in need of a hero and, one day, Ged found himself in a position to become that hero… but ended up getting himself in way over his head. I won’t retell the story in its entirety here… let’s just say that Ged’s life as a rock star wizard got off to a good start due to a lesson he learned from Ogion early on: you have power over something when you know its name. Sad to say, however, Ged’s pride and recklessness eventually resulted in his summoning of a Gebbeth… a shadow monster from the underworld that would pursue him relentlessly… dogging Ged’s steps from one end of Earthsea to the other… intent on destroying him, the people he cared for and sabotaging every good cause he undertook. It’s hard to be a hero when you’re always craning your neck over your shoulder… looking for the shadow… waiting to feel the claws of the beast rake you and drag you down. And so, Ged ended up spending a lot of time alone… and scared… and on the run. Years! Until one day, when things seemed to be at their worst, Ged managed to find his way back home to Ogion, who helped him understand that, in order to be rid of the Gebbeth once and for all he, Ged, must become the hunter, find the beast and confront it… run it to ground. And he does. And what surprised Ged was that the shadow monster seemed to be every bit as afraid of him as he’d been of it. In the end, Ged pursued the beast to the ends of the earth, to a gray place that was neither light nor dark, across a low, stone wall that separated this world from the next. His nemesis was cornered. There was nowhere else it could run. The moment of truth was at hand. Ged stepped forward… embraced the shadow… and called it by its name: “Ged,” because it was his own shadow… the shadow of ego and self-centeredness… the weeds in his life… that he had set loose, but failed to claim as his own so long ago. And that’s only the first book of the trilogy. The lessons Ged learned during his journey… through years of reckless pride, then denial and finally reconciliation… were formative in his struggle to live into his vocation as a mage and to become the hero the world needed so much.[1]

We should all be so lucky, right? …I mean to find the true vocation for which we were made. It’s hard to know sometimes… and even when we begin to get an inkling, it’s harder to figure out how to get there. But you remember what Frederick Buechner once said: “The place God is calling you to… is the place where your deep gladness and the world’s deep hunger meet.” Ged found that place, but only after he had done the hard work of becoming reconciled to himself. With that out of the way, he was able get about the more-important business of saving his little corner of the world.

So here we sit wondering how we’re going to cope with all of the weeds in our lives… the weeds that are so much a part of us that it’s had to tell where they end and where God’s good wheat begins. We all want to rid our lives of sin… so that we can be closer to God… but it’s hard. If it was black and white, then it would be easier to tell that which is from God and that which is of the Enemy. Wouldn’t it be great if it was just wheat… and weeds… if it was just sheep and goats… like it was in another parable Jesus told. But it’s not that easy. A good friend once told me that he thinks of himself as a “shoat” most days… about half-sheep and half-goat. And if we’re honest with ourselves, we probably don’t feel all that differently about the weed content of our lives on any given day. We have met the enemy and he is us. It’s messy and complicated, and there’s no telling how much progress we’ll have made untangling that mess by the time we’re called to account for our lives. And that day will come.

But here’s the thing, we don’t have to figure it on our own. The parables Jesus tells… and even stories like the one I told you about Ged, today… offer us wisdom about God’s Kingdom… and what we need to be doing to make ourselves ready to enter into it. Each day, every day, God is offering us the chance for atonement (at-one-ment)… for becoming just a little bit more “at-one” with him so that on the last day, the winnowing may be a little less painful. Surely there will have to be some winnowing… you can bet on that… but not as punishment. No. The winnowing that will take place is meant to refine us… and make us perfect… to do for us that which we cannot do for ourselves: to restore us to newness of life in Christ Jesus.

You may have heard it said that the first step in solving a problem is to name it… to admit that it exists. We must claim the weeds in our lives. Surely, they are seeds sown by the Enemy… but they’re also as much a part of us as the good grain God intends us to become. So be reconciled to yourself. This is the first step on your path to true righteousness… which is “at-one-ment” with your Heavenly Father.

Let anyone with ears… listen!