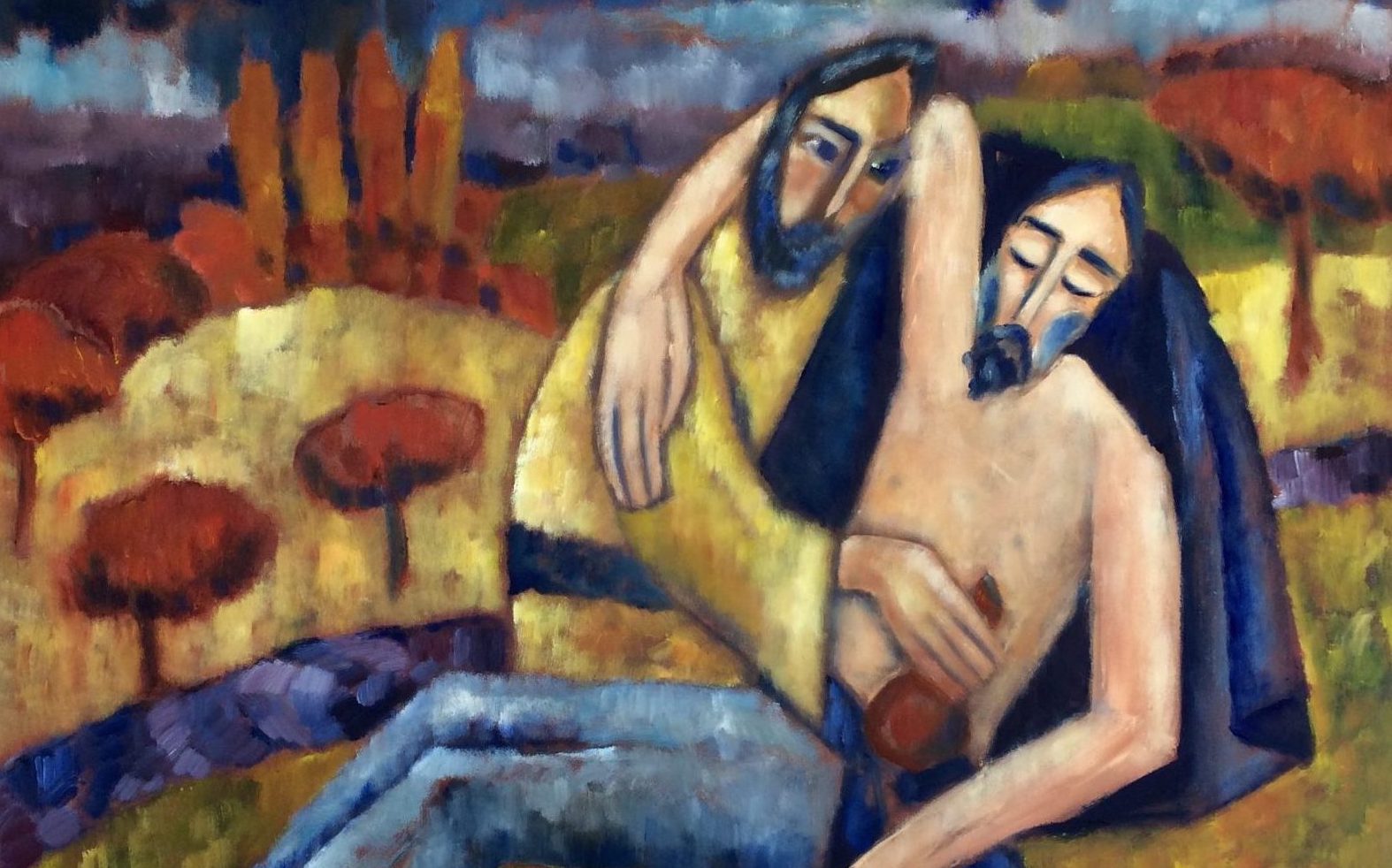 But… Father Kemper, Father Kemper! I always thought that we we’re saved by faith… not by works. That’s what the Apostle Paul said, anyway. Who does this James guy think he is?

I’m glad you asked. We’re pretty familiar with the Biblical name “James,” aren’t we? From the Greek Ἰάκωβος, Jacob, as in Israel father of the Twelve Tribes. James, son of Zebedee, brother to John. James the Greater. St. James… our James. But that’s not the James who wrote the letter from which today’s epistle is excerpted… the one who famously penned “Faith… without works, is dead.” Nope. The writer of the Letter of James is most likely James of Jerusalem, who many scholars have come to believe is the flesh and blood brother of Jesus Messiah. You know, it’s pretty funny… a lotta folks kind of envision Jesus as an only child. Right? Mary was a virgin, engaged to Joseph, when Jesus was conceived by the Holy Spirit. And after the massacre of the Holy Innocents, when Jesus was still a baby, and the trip to Egypt, we don’t hear much about the family life of Mary, Joe and the kid. Not until the bit about Jesus getting lost in Jerusalem when he was twelve (Luke 2:41-52), at any rate. And after that, nothing… nada… ‘til Jesus showed up at the Jordan to get dunked by his cousin John (Luke 3:21-22). And from there on, it’s pretty much all Jesus, all the time. Joseph has dropped completely out of the story by this time and we don’t really even hear Mary’s name all that often in the post-childhood gospel narrative, except on a few occasions, such as the story of the Wedding in Cana (John 2:1-12) and also Mary at the foot of the Cross (John 19:25). We do, however, get some tantalizing references to Jesus’ family, particularly his siblings, though we aren’t given much information about them outside of their names (e.g., Mark 3:21, 31-35 and Matt 13:55). “‘Is not this the carpenter, the son of Mary and brother of James and Joses and Judas and Simon, and are not his sisters here with us?’ And they took offense at him” (Mark 6:3).

So, Jesus apparently had some brothers, and one of them was named James. James features prominently in the Book of Acts. James and his mother were present to receive the gift of the Spirit at Pentecost (1:14) and he gradually assumed leadership of the church in Jerusalem as the years went by, hence his designation as “James of Jerusalem.” He appears to have gotten along rather well with the Apostle Paul, and was instrumental in the church’s acceptance of Paul’s Gentile mission and the basic freedom of Gentile believers to eschew the stipulations of Jewish Law (Acts 15:13-21). James “the brother of Jesus” is also attested to outside the New Testament in the writings of Josephus and Eusebius, the first historian of the Christian Church, who gave him the title of “James the Just.” He was eventually martyred, like many other early Christ followers, but his letter, this letter, did manage to make it into our Canon of Scripture, so someone back in the fourth century must have thought it was worth passing on.

Faith and works. It does jangle with some of Paul’s writings, doesn’t it? Paul wrote, “For by grace you have been saved through faith, and this is not your own doing; it is the gift of God— not the result of works, so that no one may boast” (Ephesians 2:8-9). “[So] what becomes of boasting? It is excluded. By what law? By that of works? No, but by the law of faith. For we hold that a person is justified by faith apart from works prescribed by the law” (Romans 3:27-28). “Since we are justified by faith, we have peace with God through our Lord Jesus Christ, through whom we have obtained access to this grace in which we stand; and we boast in our hope of sharing the glory of God” (Romans 5:1-2). Paul admonished the Galatians: “The only thing I want to learn from you is this: Did you receive the Spirit by doing the works of the law or by believing what you heard? Are you so foolish? Having started with the Spirit, are you now ending with the flesh? Did you experience so much for nothing?” (vv. 3:2-3). And I could go on. You should know that all of the bits from Paul I’ve just read you are excerpted from different letters, written at different times to different congregations of believers throughout his years in the missionary field, cunningly arranged and strung together to make a point… proof texting, it’s called… and the point would seem to be sola fide... we are saved by faith alone. Paul said it, I believe it and that settles it, right? And we all probably know some who folks who would be in utter lockstep with that sentiment. That certainly seems to have been the take of Martin Luther and many of the early Protestant agitators back in the fifteenth and sixteenth centuries as Reformation fever swept across Europe, ushering in decades of religious turmoil, Inquisition and civil war.

But lost in all of the proof texting is… context. First and foremost, a closer examination of the context of Paul’s harangues about “works” reveals that he’s referring to “works of the law.” Paul’s mission was to bring Gentiles into the Christian fold. Many Jewish Christ followers in the Jerusalem Church believed that, to be a follower of the Jewish Christ (Messiah), you first had to become a Jew, which meant adhering to all the requirements (or works) of Jewish Law. And the 613 mitzvot of the Law informed every aspect of a Jew’s daily life: how and when you worshipped, personal cleanliness (including the requirement for male circumcision), business practices, what you wore, what you ate, who you associated with… and much, much more. And Paul knew that first having to place oneself under the authority of Jewish Law to become a Christ follower would likely constitute a barrier to Gentile converts raised outside of that faith tradition… hence Paul’s constant admonitions that a believer was saved by faith alone, and not by the works of the law. And James of Jerusalem, brother of our Lord, strongly supported Paul’s doctrine that one need not become an observant Jew to follow the Way of Jesus. Faith in Christ, alone, is sufficient.

Around fifteen hundred years later, Martin Luther would leverage Paul’s writings to buttress his argument that the Roman Catholic church which, he asserted, had become corrupt and self-serving, had no business imposing its own “works of the law,” on believers in order they might obtain salvation. These new “works” were not based on Scripture, but on church doctrine (e.g., confession, payment of indulgences, and the like) and should be ended immediately. Luther’s “Ninety-five Theses” in 1517, followed around a quarter century later by the Augsburg Confession, brought the “reformation pot,” which had been simmering for the past two (or even three) centuries, to a rolling boil. And the rest is history.

So, we return to our conundrum: Is it faith, or is it works? Is it Paul, or is it James? Or could it be… both? I don’t think the Apostle Paul was a self-centered jerk… though some might disagree. At least not after his “road to Damascus experience.” I can’t imagine any true Christ follower leaving the hungry and thirsty to fend for themselves, neglecting to welcome a stranger, kicking a poor person to the curb, or willfully ignoring those who are sick or in prison. Or any observant Jew, either. Buried amongst those 613 mitzvot of Jewish Law, there are plenty of prescriptions for how God’s Chosen People were to treat one another. And they all tend towards kindness. And so, I don’t believe Paul was telling his churches to refrain from doing good work. He was just telling them that it would do them no good to do the right thing for the wrong reason. When we follow the prescriptions of our faith, we cannot help but do good work. God puts opportunities to do good work in front of us every single day… right slap dab in the middle of our paths. If we miss such opportunities it’s because we, like the priest and the Levite in the Parable of the Good Samaritan (Luke 10:25-37), choose to “pass by on the other side of the road.” Too bad.

The Letter of James contains another pithy admonition of which I’m very fond. We read it just last week… he writes that we are to be “…doers of the word” (v. 1:22). Preaching and teaching and evangelizing are wonderful things, but it’s only when we, like the Good Samaritan of the parable, are moved to pity by the sight of a man left for dead on the side of the road, and stoop to bandage his wounds and provide for his continuing care, that we’re “doing the word.” This dovetails nicely, I think, with a quote often misattributed to St. Francis of Assisi: “Preach the Gospel at all times. When necessary, use words.” Whether or not St. Francis actually said it, like Snoopy the Dog, “I’ll quote truth wherever I find it, thank you” (Richard Bach, Illusions). First, be Christ to a world in need of hope. Anything else that comes after that is gravy. Faith and good work go hand in hand…. one is your left hand, one is your right. We don’t do the work in order to be saved, we do it because stems from who we are: Christ’s hands and feet in a world that often seems overcome by violence, greed and indifference. But never forget… we have a choice. We can be doers of the word. We can preach the Gospel with our minds, souls and bodies. Or we can cross to the other side of the road. We must be careful in our choosing, however, because we are saved by faith alone… but faith without works is dead. James said it, I believe it and that settles it.

Rich Mullins explains his take on faith and works in the song “Screen Door”… I hope you enjoy it!